The Italian newspaper Repubblica published an article on 24th October 2016 signed by someone who is not a journalist, by someone who is working all over the world for a multinational company whose services and products are used by almost 1.17 milliard people around the world.

We are talking about Google and Eric Schmidt who signed an article whose title was ““La rivoluzione targata web – E Google fa crescere l’economia del pianeta” (“The web revolution – And Google improves the economy of the planet”).

This is really something extraordinary but what astonished us above all is the fact that Mr. Eric Schmidt (CEO by Google) mentioned our company in his words and reflections.

A question came immediately in our mind: how are these two different companies, so far away as for location and structure – Meda (Brianza) and Mountain View (California) connected in Eric Schmidt’s mind?

By reading the article we noticed that Mr. Schmidt draw the story of our company in the last ten years and described the improvement we made on the internet level: we publish everything we do, we narrate the story of the company by using different web tools, such as Facebook and YouTube, we have a Blog translated in six different languages and we constantly promote our activity on many browser. 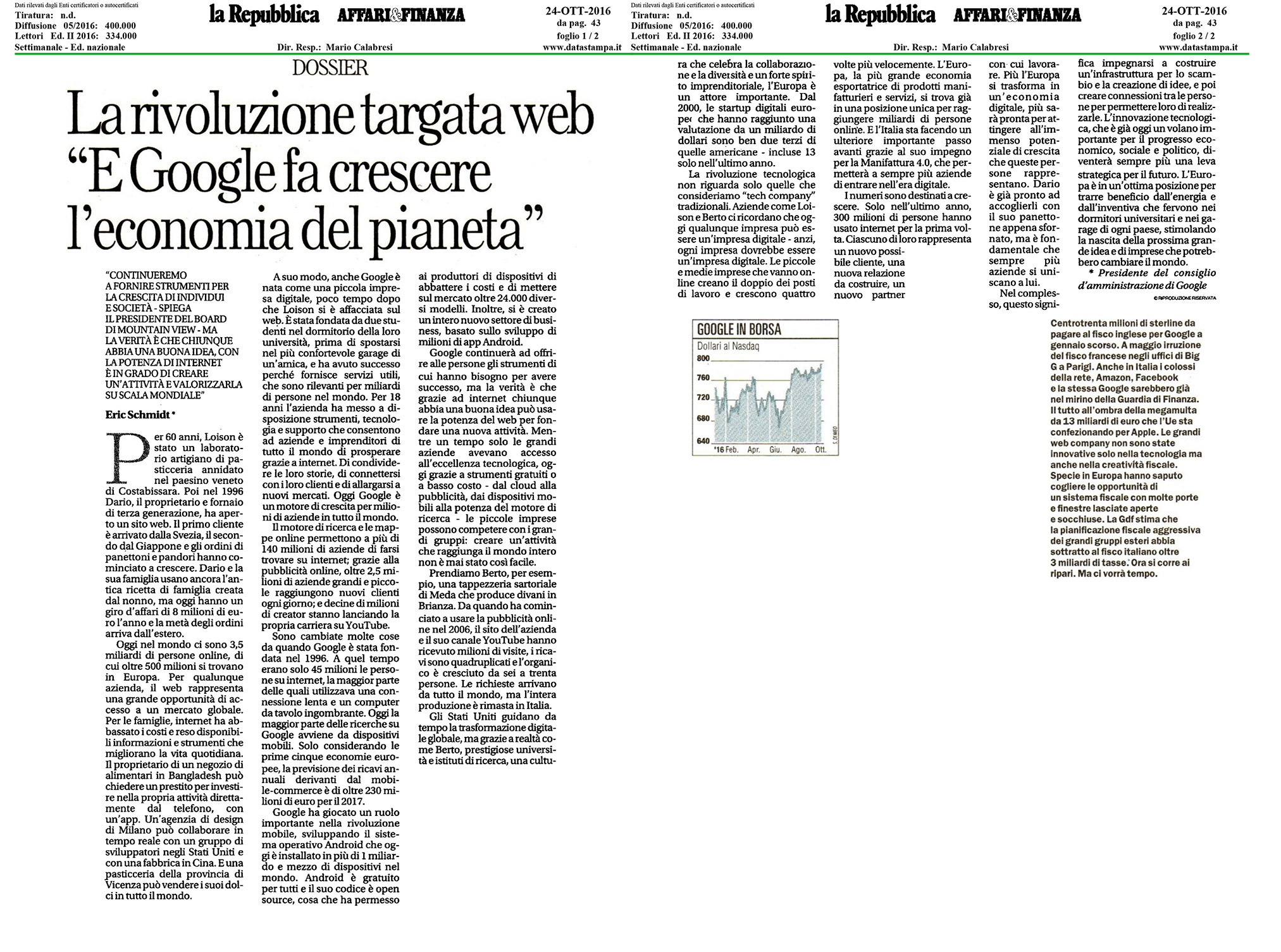 Here the description of our company Mr. Eric Schmidt wrote in the article: “Let’s take BertO for instance, a fine tailoring company that produces sofas in Meda – Brianza. Since they started using online advertising in 2006, the company website and its YouTube Channel have received millions of visits, their incomes have increased fourfold and the number of employees has increased from six up to thirty people. They receive requests from all over the world, but the production is still in Italy.”

“Thanks to the existence of these companies, such as BertO, Europe plays nowadays an important role for the global digital revolution. Eric Schmidt.”

We are really proud, even ashamed somehow, that all our efforts are mentioned as a real example for communication and marketing strategies to promote initiatives and products, which cannot be compared with Google investments for sure but they are really important for a company like BertO.

And all this goes beyond Italy, as the CEO Eric Schmidt says: “

“The United States has been playing a leading role in the global digital revolution, but Europe is an important actor as well – and all this can happen thanks to different entities, such as BertO, prestigious universities and research institutes that promote cooperation, variety and a strong business initiative.”

Our artisan brand, made in Brianza, has been taken into account by Google not only for what we are able to create thanks to all internet services, but also for European ambassador as for digital revolution.

All this reminds us about the program “Eccellenze in Digitale “ (“Digital Excellence”) we are part of together with some other Italian companies, and that, thanks to Google, promotes the development process in Italy and Europe.

What Mr. Eric Schmidt says about the internet power is a great acknowledgement for all of us who believe and consider the network an important mean of communication and BertO is really proud to be an example even for Google.

This prestigious acknowledgement means a lot for all of us working by BertO.

It is a sort of endorsement for our way of working: we started using online advertising even when all social networks were considered something distant and unusual, especially for a PMI in Brianza.

And then it means that who dares, sometimes, gets some rewards: we are artisan, sometimes we just follow our instinct, our passion, our work is not always subjected to business income, but now we can say that, when we decided to use internet as a new way of working, we were following the right attitude.

Besides that, this means a lot even for our working area: we live and work in Brianza and we are proud to be a part of it.

We feel extremely proud when we read that Google is talking about Meda on a national newspaper and we know we are in the right place: we have always been thinking in the same way but it is a great honor to be recognized in such a great manner.