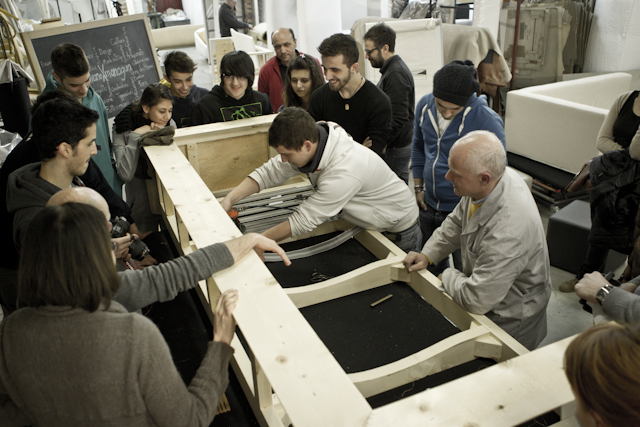 We all worked together – our veteran artisans, the students from the School of  Upholstery, AFOL in Meda, the designers, a fellow craftsman from Cabiate, Italy, of whom we didn’t know before and a few individuals who were just curious about our project.   Let’s not forget that the # divanoXmanagua will be a very high quality hand crafted sofa starting from its design and a very sophisticated wooden frame.

While the first workshop was dedicated to the design of the sofa, the second was entirely committed to the actual structure, in fact, this time we had to roll up our sleeves and move fully into the act of “doing.”

This is where problems began to arise:

How do you present the task of preparing the wooden structure to the carpenter?

How do you prepare the structure of the sofa for the deep buttoned “capitonné” surfaces?

How do you make the padded surfaces without creating a problem known as, “arms with a belly”?

How do you create soft comfortable seating while at the same time allowing for differences in firmness?

And finally, “What is the Italian translation for the word baslètta in dialect?”

Needless to say, it was very interesting and sometimes even funny, one of the designers argued that quality must be of utmost importance, while the veteran craftsmen were biting their tongues, trying not to steal the words right out of the mouths’ of the “guests” of whom were making some very animated comments; a university student and a few of the guests who work in the field, shook their heads in disbelief and said, “it’s not possible, this can’t be done.”

The most astute among us were, as often happens, the youngest and least experienced in the group.

The highlight of the evening was listening to a 15 year old speak to Mr. Carlos Berto, a craftsman and upholsterer for over 50 years.  Students, of whom are highly motivated to learn and very attentive, but lack experience, asked genuine questions in front of problems we experienced in the laboratory.

There was genuine awkwardness on the part of the youth in understanding the responses to the mountain of technical questions but when the questions were simplified and reformulated in terms closer to their experience, they were able to follow.  There was great satisfaction and gratification from the teachers who were also present and never missed the chance to respond to their students during this extraordinary educational experience.  It could be that they don’t realize that it’s also an opportunity for us as well.

In fact, we clearly understand the amount of incredible human capital we have in these teen-agers, too often described as lazy and immature, but instead are observant, participative and constructive.

We are committed to encouraging the students as well as anyone else who would like to join our forthcoming workshops: we will be in Rome on March 3rd, in Meda on March 14th and the 28th, and in Milan at the FuoriSalone Ventura in Lambrate on April 11th.

This event has been made possible by a coordinated effort of public relations and communication at all levels.  The # divanoXmanagua has already began to take shape and soon we’ll tell you; how many people, blogs and magazines have already talked about the project, in these early stages.

In the meantime, here’s the story on yesterday’s session.

Thank you to everyone and we hope to see you in Rome on March 3rd!